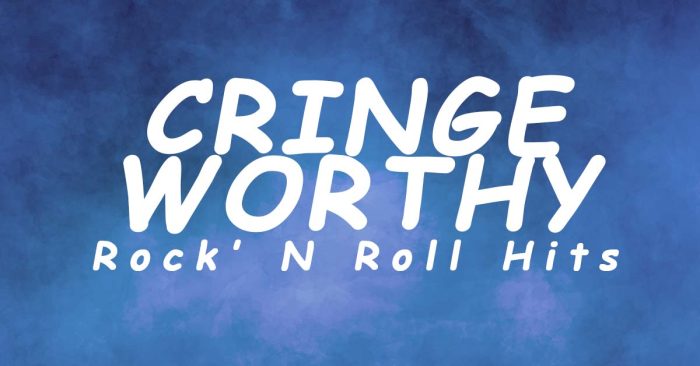 If you think the lyrics of some of today’s hits are inappropriate or beyond good taste, it may be worth taking a look back through time. The rock’ n roll era has been filled with hits with cringe-worthy subjects and lyrics. Here are just a few.

In 1970, one hit wonder band, The Bouys decided to record a song about three men who were trapped in a mine cave-in. In about three minutes, they told the tale of how three were trapped but only two survived. In the song, the singer woke up with a full belly. “Timothy” was missing. The implication is that Timothy was cannibalized. Ewww.

Snoopy VS The Red Baron – The Royal Guardsman

This was a cute novelty song that featured the world’s most famous beagle. The problem is he was taking on World War I flying ace The Red Baron. Serious stuff, right? Especially when the lyrics included “10, 20, 30, 40, 50 or more, the bloody Red Baron had rolled up the score.” Thank goodness Snoopy wins.

They’re Coming to Take Me Away Ahh Haah.- Napoleon XiV

This song would be so inappropriate today. It is essentially about a guy who loses his mind over the break-up with his girlfriend. He is waiting for men in “white coats” to take him to “the funny farm”. As a side note, the single has the song recorded in reverse on the B-side.

This early 1960s song was a part of a series of teenage tragedy songs. The singer tells a tale of going out for a ride in his Stingray and being challenged by the driver of a Jaguar XKE. An accident on “Deadman’s Curve” claims the life of his girlfriend. Making the song more cringe-worthy is the sound effects of the crash and a girl screaming “look out, look out.” Eerily enough, Dean Torrance of Jan and Dean was involved in a near fatal accident within proximity of the real Deadman’s Curve in California a couple of years later. He was driving his Stingray.

Does paying your insurance premiums make you cringe? You have choices. Contact our team of independent insurance agents for no obligation quotes on your auto, life, homeowners or business insurance. Saving money may be just a call or email away! Connect with us today.

Getting Serious About Energy Savings

Getting Your Mind Out Of the Gutter: Fun Bowling Facts

What Are the 7 Habits of Highly Effective People?

Distinctive Automobile Headlights of the Past